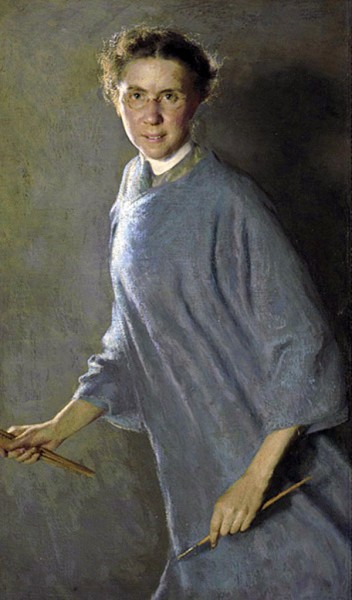 This Self Portrait (curiously subtitled ‘A Motion Picture’) is by Margaret Foster Richardson (1881-1945). She was best known for her portraits in oil and also drew portraits in silverpoint and exhibited landscape sketches and genre scenes. She studied at the Massachusetts Normal School from 1900-05 and attended the MFA School from 1905 to 1908, where she was a student of Edmund Tarbell and assisted Anson Cross in his perspective class. She achieved tremendous early success but then faded out of sight (?maybe she became a mother…). Her work was  selected for numerous national exhibitions, beginning in 1908 with the Corcoran Gallery Biennial, and she was given her first solo show at the Copley Gallery in 1910. In 1913 this painting was bought by the Pennsylvania Academy of the Fine Arts where it is still on show. After that silence.