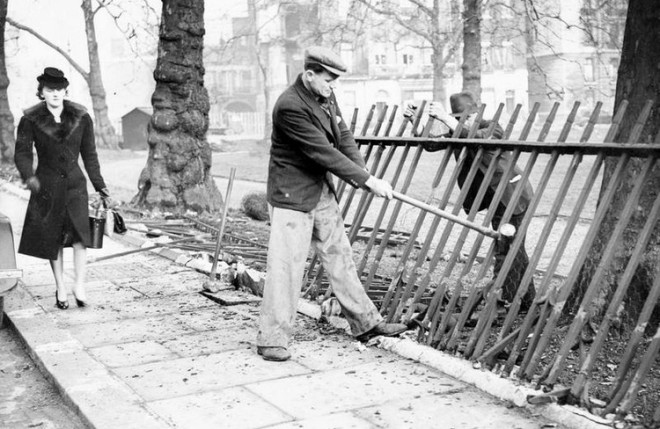 Chapter 4 of Bloomsbury is our favourite – it deliciously connects railings round squares with railing as in protesting (a link which had never occurred to us before). The book has a different but very similar photograph of railings being demolished in 1941. This one is taken from here and is accompanied by a lament by GB Stern (which is not about Bloomsbury specifically which is why it is not in the book). After the lament for the railings there is a superb quotation from George Orwell railing against the imagery of railings – their removal was ‘a democratic gesture. Many more green spaces were open to the public.’ The chapter then morphs into the suffragettes (tying themselves to railings) and Mary Wollstonecraft, and one of our very favourite novels, Isabella Ford’s On the Threshold (1895), which depicts Bloomsbury streets brimming with political potential, both for feminist and socialist causes. And the chapter reminds us that Emmeline Pankhurst lived in Russell Square and Millicent Fawcett at 2 Gower Street; finally there is ‘one of the most important events of the suffragette movement’, the funeral of Emily Wilding Davison at St George’s, Bloomsbury. Brilliant stuff.