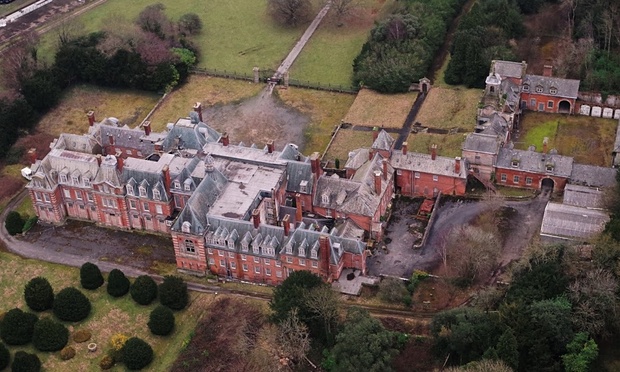 Kinmel Hall, ‘the Welsh Versailles’, was ‘built in the 1870s by Hugh Robert Hughes, nicknamed HRH not only for his initials but for his spectacularly ostentatious lifestyle: the house originally had 52 main bedrooms, further accommodation for sixty servants, and one room kept just for ironing the newspapers. It hasn’t been a family home since 1929’ (Guardian).  After the war the hall became Clarendon Girls’ School, but after extensive fire damage in 1975 was forced to close. Restored by a businessman as a Christian conference centre, it was sold at auction in 2001, but a proposed redevelopment by Derbyshire Investments failed to happen. Now it is in grave danger of demolition.