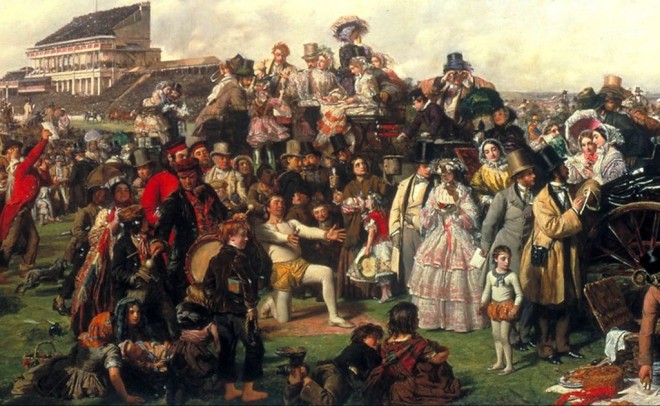 ‘In the centre of the picture is a boy selling cigars from the box under his arm. In his hand is a piece of smouldering tarred rope for him to give the customer a light. To the right of this boy is an acrobat, encouraging his son to leap into his arms. The son is not paying attention but staring at the luxurious picnic being unpacked from a wicker hamper by a rich family’s footman. There is a large pie and a whole lobster, among other delicacies. Straw packaging from the hamper and a large lump of ice are also on the ground. Frith found the acrobat and his son in a pantomime at Drury Lane but they were not able to sit still for long periods, so Frith bought their costumes from them for professional artists’ models to wear. A preliminary rough sketch of the acrobat’s pose is in the British Museum’ (taken from Epsom and Ewell History here).