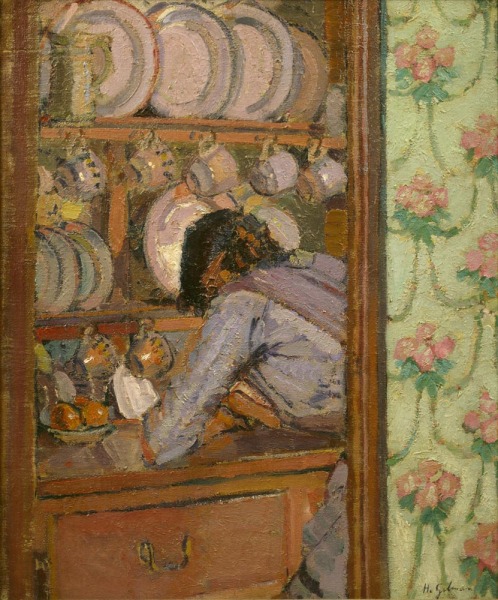 Harold Gilman: Beyond Camden Town is a new exhibition at the Pallant in Chichester: it runs until June 9th. ‘Harold Gilman (1876–1919) broke away from his contemporaries to produce a view of modern urban life in the early 20th century that was entirely distinct. He combined the gritty formality favoured by the Camden Town Group and his mentor Walter Sickert with the vitality of post-impressionism, with its thickly applied paint and vivid colours. Gilman’s subject matter and manner of painting were unusual bedfellows. His paintings infused scenes of everyday domestic life with a vigour clearly influenced by Vincent van Gogh and Edouard Vuillard [who will be the subject of the Post next week, because there is an exhibition just about to open at the Holburne in Bath]. His intimate depictions of domestic interiors captured a moment in time around the First World War when perceptions of gender, class and urban living were rapidly changing.’ ‘The Shopping List’ was painted in 1912.