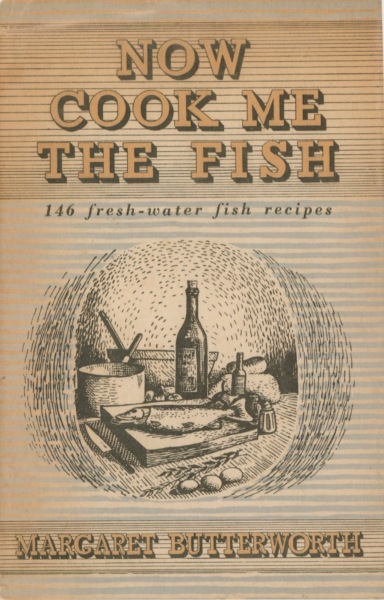 A 1950 cookery book with a cover by an unkown illustrator (although they were clearly influenced by Eric Ravilious) which prompted a discussion here of the importance of fish-buying in fiction: so often, in the days when middle-class women believed they should not do their own cooking and Cook ruled in the kitchen, buying fish was one of the few things they did for themselves. At the beginning of The Enchanted April by Elizabeth von Arnim Mrs Arbuthnot’s life revolves round dreary expeditions to buy fish – until she abandons fish and goes to Italy. But in A House in the Country (PB no. 31) Cressida lives too far away from town to go to the fishmonger herself each week (and she is too busy) and so her fish parcel is wrapped in paper and delivered to her on the local school-bus.