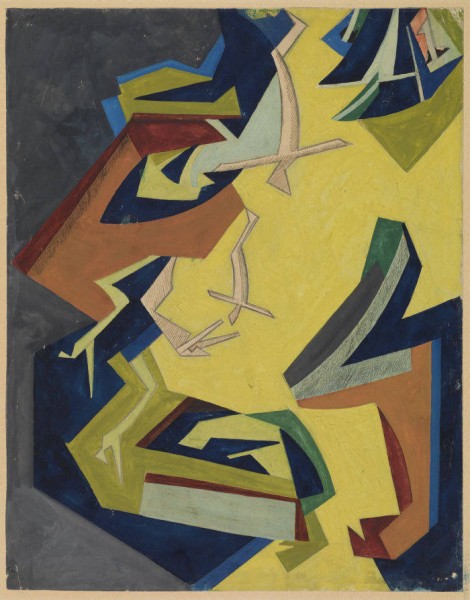 Helen Saunders (1885-1963) was in Jessica Dismorr’s circle. This is her Vorticist Composition Yellow and Green. Richard Cork has written: ‘Since Saunders’ early work earned her a respected place in experimental circles, the gathering obscurity of her later years seems cruel. She endured the neglect with uncomplaining stoicism, for her innate warmth prevented her from succumbing to bitterness.’ Here is Cork’s DNB entry about her, reproduced here in full since we are always sadly aware that many people can’t access the DNB (it is in fact free with any library card): ‘Jessica Dismorr’s friend Helen Beatrice Saunders (1885–1963) was born on 4 April 1885 at 10 Addison Road, Bedford Park, Chiswick, London, the daughter of Alfred Robert Henry Saunders, a solicitor, and his wife, Annie, née Daley. After being educated at home, Saunders studied at the Central School of Arts and Crafts and at the Slade School of Fine Art (1906–7), and exhibited with the Friday Club in 1912. By then her interest in post-impressionism was evident, and she showed her work at the Allied Artists’ Associationin 1912 and 1913. One of the first in Britain to work in a non-figurative style, Saundersreached her most extreme stage as a painter in 1914 when she exhibited at the Whitechapel Art Gallery’s ‘Twentieth Century Art’ exhibition and joined the Rebel Art Centre. Like Dismorr, she contributed a poem as well as an illustration to the second issue of Blast, and was included in the vorticist exhibitions in London and New York. But she came closest to Lewis when together they painted murals in the Vorticist Room at the Restaurant de la Tour Eiffel, Percy Street, London. At the end of her life Saunders was living at 39 Gray’s Inn Road, Holborn, London. Following her accidental death by gas poisoning on new year’s day, 1963, three of her works—Monochrome Abstract Composition (c.1915), Abstract Composition in Blue and Yellow (c.1915), and Abstract Multicoloured (c.1915)—were that year presented to the Tate Gallery in memory of her sister by Ethel M. Saunders.’ Later today we shall get our lunch from the lovely John Charlick in Gray’s Inn Road and pay tribute to Helen Saunders outside number 39.